Recently, I was asked a question. “If I use MPLS, do I need to do encryption to be HIPAA compliant?” Multi-Protocol Label Switching (MPLS) is different things to different people, depending upon the networks involved. In this context, it was a Metropolitan Ethernet (Metro-E) network being provided by a local cable company.

So, the answer is: Yes. Data in transit must be encrypted. Often times, the cable companies characterize their MPLS as being dedicated facilities. In fact, they are not. Let’s take a look at what a typical cable company network looks like:

We are most concerned with the components in the Metropolitan Area Network (MAN). A “Hub” is a physical building. They connect to other Hubs via fiber facilities, usually on a SONET (Synchronous Optical Network) ring. One or more Hubs may be designated as a “HeadEnd”, meaning that it is receiving TV content for redistribution.

Hubs connect to “Nodes” that serve local communities. This is *usually* done with fiber, but can be with coaxial cable if need be. Furthermore, Nodes can also interconnect to other Nodes. Much of this local topology is dynamic, driven by subscriber density and requirements. Almost assuredly, coming out of the node towards the subscriber is coaxial cable, although FTTP (Fiber To The Premises) is being deployed in the larger metropolitan areas. This type of network is sometimes called a “HFC” network – for Hybrid Fiber Coax.

Nodes are interesting in that they are boxes that are placed in the field, require power, and subject to extreme environmental conditions. They usually have batteries in them to keep things going in the event of power glitches and outages. They are specially constructed to use as low amount of power as possible (heat), with plenum-based cooling and ventilation. It is not as easy as it may sound. Here’s a picture of one as it looks coming off the factory floor:>/p> 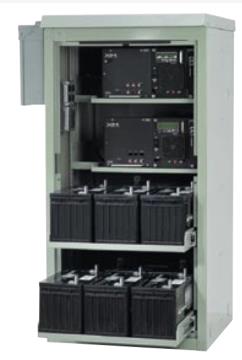 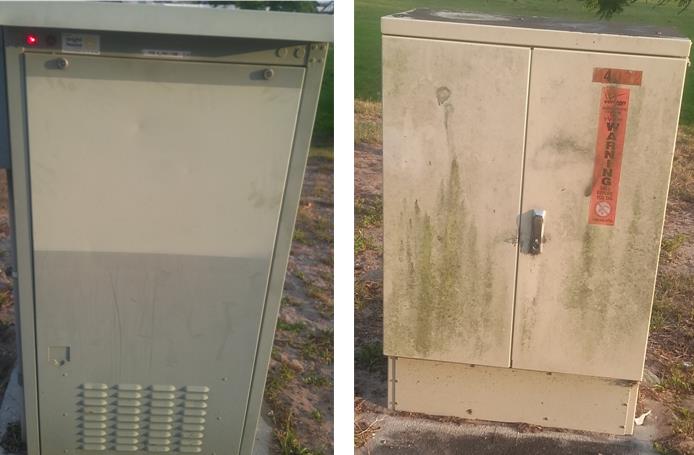 There really isn’t much security when it comes to Nodes. They usually all share the same common key to unlock them, if they aren’t already broken to begin with. Should you want to gain entry otherwise, a heavy-duty screwdriver or pry bar will do the trick. To complete the network, there are various coax amplifiers, splitters, and taps. 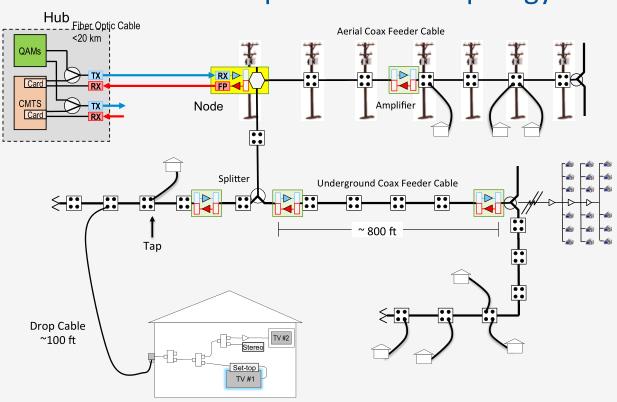 Well, that’s about all there is to know about Cable HFC systems and architecture. As you can see, there’s not much of anything “dedicated” in their infrastructures.