Spectrum Networks: Regulate as a Carrier?

Recently, I replied to a LinkedIn fellow’s post regarding SD-WAN (Software Defined Wide Area Network) versus MPLS (Multi-Protocol Label Switching).   In cable transmission parlance, MPLS is sometimes referred to as “Metropolitan Ethernet” or “Metro-E”.  This is defined in the DOCSIS 3.0 (Data Over Cable Service Interface Specification) standard.  I replied with the comic up that you will find below.   This demonstrates a couple of points:

In some strange ironic twist, their VoIP traffic between the two sites, only 10 miles apart, is routed based upon jitter; so even the VoIP traffic will usually take the VPN 2 (Red) route.

This case demonstrates that as Spectrum has expanded their MPLS client base, the ATM cell loss over their saturated SONET links (Orange) used by VPN 1 (Black) actually detracts from SD-WAN viability. Note that the Headquarters office in Tarpon Springs only has one high-speed carrier facility available to them (Spectrum).

Performance over VPN 1 (Black) has consistently deteriorated, while Spectrum MPLS sales have consistently increased.  To me, this is a clear case of MPLS extortion, albeit through Spectrum’s ignorance and poor network management.  The problem is that this problem traverses three counties in Florida (Pasco, Hillsborough, and Pinellas).  Whose responsibility is it? 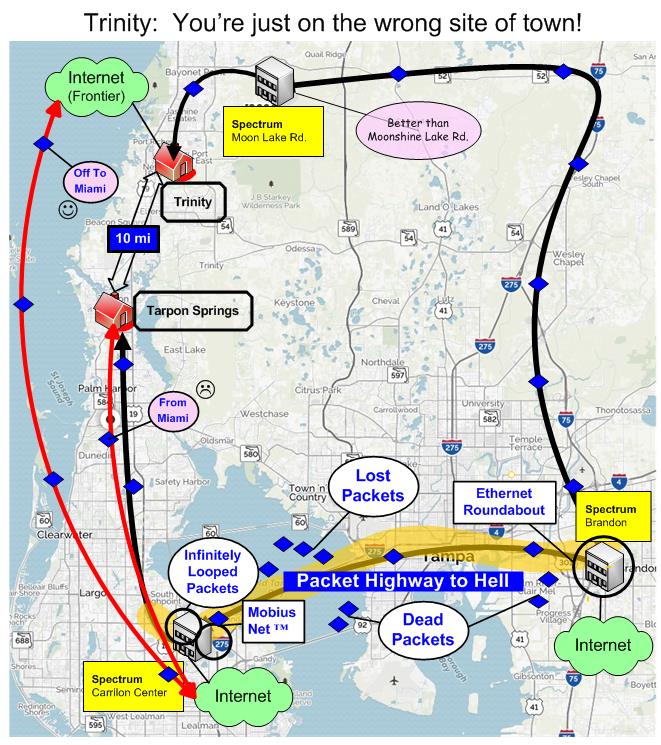 « Meaningful Use vs. Actual Use » Email Security: Trim Those Distribution Lists